Are you regularly confused between a generator and an alternator?

They surely sound confusing but it is really simple when you come to know the major differences in both these devices.

Both a Generator and an Alternator can be broadly termed as Generators. Meaning both devices are in fact generators with the major differences being in their working, construction and output.

But before you know these differences you must understand certain basics which will be really helpful in understanding the differences.

The working of the generator is based on Michael Faraday’s (1867) laws of electromagnetism. Both a generator and an alternator are used to convert mechanical energy into electrical energy. Hence both of them are used for the same purpose that is to generate electricity. They do this by a process called as “magnetic polarisation”. Both these devices can also be used as electric motors, when it is supplied with electrical energy instead of mechanical energy. 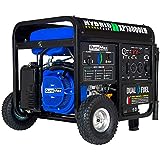 The electricity generated by the generator is supplied to us as two different currents, namely: Alternate Current (AC) and Direct Current (DC)

In a Direct Current the charged electrons flow directly from one point to another, like a battery where the current flows from the positive point to the negative point.

But in an Alternate Current the flow is reversed for a specific time period. This results in an electron pulse different from that of a Direct Current. The number of times this pulse happens in a second is known as the frequency. The conventional frequency in the U.S is at 60 Hz i.e. the electron pulse happens 60 times in one second.

With these basics in mind, you can now easily differentiate between an alternator and a generator based on the following points.

It is also known as Dynamo or DC Generator.

Generators typically have wire coils that form a rotor. These windings are also called as the armature. This rotor is placed inside a magnetic field made by magnets. Now in a generator these wires are moved mechanically. The magnets do not move. This mechanical movement creates a current in the wires which is the alternate current.

Now the generator has a mechanism known as a commutator which converts that alternate current into direct current and gives the output in DC. The commutator is basically a set of separate rings attaching the generator to an external circuit.

Alternator was a term introduced for the better, reliable and more efficient generators released in the late 1950’s. Immediately it became a winner and replaced the generators in the cars for charging the batteries. AC generator is also termed as an alternator.

It is also known as synchronous generator. This is because it works in sync with the power grid it is connected to. They follow the grid’s frequency, EMF and phase. But these are only large alternators.

In alternators the magnetic field moves inside of a winding of wires called as the stator.

The generator is used commonly during a power cut and for generating large-scale electricity.

The output power produced by generator is less than compared to that produced by an alternator.

As the generator uses all the energy it generates, it can be termed as less efficient than an alternator.

One of the many reasons for the generators being replaced by the alternators is that it drained the batteries of the cars and vehicles when the demand was high, like in wet weather, when you need the windshield wipers and the lights. Using both together would result in low performance. The generator couldn’t provide enough power for both when the engine revs were low.

Now a day’s generator is not in much use as it is not as efficient as an alternator.

The most common use of the alternator is in the automobile industry to charge vehicles batteries. The alternators are also more favoured for commercial use beyond cars as it works great with transformers.

Alternators are not good for charging dead batteries but generators are good at it.

Both the devices generate electricity as AC. But a generator can give the output in AC as well as DC and the alternator gives the output just as AC

The design of the generator is simpler when compared to an alternator.

In terms of size a generator usually is large and needs more space than an alternator.

Generators have brushes which collects the power generated from the armature. Like every equipment, the brushes are also subjected to wear off through time, making the generator not so efficient and cost effective.

Alternators have a complex and sophisticated design due to the requirements needed to regulate the flow of an Alternate Current.

The alternator does not have brushes which makes it more robust and durable. The Alternate current produced is collected from the stator side and hence there is no need for brushes.

The alternator also does not have a commutator as it does not convert the power to DC.

A safety measure that comes with an alternator is the voltage regulator which ensures that the alternator is not giving extra energy to a battery causing damage to the battery or the surroundings.

Some other differences between the two are:

To sum it up the difference between a generator and an alternator is all about what spins and what remains stationary.

Due to its cost effectiveness, less maintenance and increased efficiency an alternator is favoured over the generator these days and now you too know exactly why.

Here are some of the bestselling alternators and generators from the finest companies that produce machineries.

It promises great quality and premium make for its equipments. 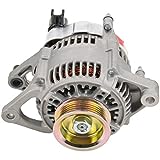 It is a gas powered generator offering an electric as well as plug start. It Boasts a fuel tank of 16 gallons and provides up to 10 hours of power.

The make is more durable and flexible.

It comes with lubricated components and computer tested regulators for better voltage stability, terminal function and electronic circuit board integrity.

Generator transfer switches: must have for safety